The Company owns the fishing rights at the fishery in the River Test and its carriers and has access rights along the banks. It also owns a small amount of land alongside the main carrier. The rest of the land within the fishery is privately owned and is currently farmed under the Environmentally Sensitive Area scheme.

It is managed for hay or silage, which is cut in July after the wild bird population has fledged. In the late summer and autumn sheep graze the fields by rotation. This management regime is intended to provide a favourable habitat for ground nesting birds, particularly waders, in the spring. 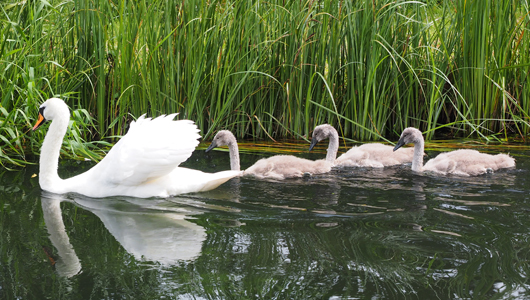 On the river there are several species of duck, a resident population of swans and other water fowl. In the early season members will frequently see nests on or adjacent to the river bank. Please be careful not to disturb them. Please stay on the mown rights of way and, when sheep are on the land, keep dogs well under control.

The River Test has been designated as a Site of Special Scientific Interest (SSSI). The management regime for the fishery recognises this status. One of the management objectives is to preserve the aquatic environment (particularly through weed cutting and control of water flow in the carriers), as well as encouraging diversity of habitat for invertebrates, to try to resist the general decline in fly life on the river.

The fishery has a healthy population of water voles, which are nationally in severe decline. There are numerous other relatively rare species which inhabit or visit the water meadows including barn owls (which sometimes nest in the owl box near the main fishing hut) and several species of bat.