The Spirit of the Fishery

Timsbury is a members’ organization. Members are expected to behave at all times in a way which reflects concerns for other fishermen and which allows all those involved to enjoy peaceful fishing in a friendly and co-operative environment. The rules should therefore be largely a matter of common sense and members should interpret them, if necessary, in a way which preserves the spirit of the fishery.

Details of fishing seasons are given in the annual information booklet for members. The Timsbury trout fishing season, with allocated beats, usually runs from late April until early October. Our fishing seasons are set to comply with closed seasons fixed for particular species of fish imposed by the European Union or DEFRA. There are many statutory provisions and bye-laws applicable to the River Test made by the Environment Agency and other competent bodies; members must do their best to comply with them. Members may not fish until one hour after sunrise and must leave the river one hour after sunset, both times as published by the Meteorological Office on an official daily basis.

THE “FREE FOR ALL” PERIOD – The beat rotation plan is circulated annually and comes to an end in early October. From then until close of the national trout fishing season on 31 October, all members are entitled to fish whenever they want and on any beat within the fishery. Members should notify the Fishery Manager in advance of their intention to fish. If there are several members wishing to fish on any day, they should reach agreement among themselves about who fishes where. Apart from this, the normal rules of the fishery apply during this period except that members may not bring guests or let their right to fish. This is an extension of the fishery’s normal season for the benefit of members.

2. HOW TO CATCH FISH

Salmon: artificial fly with a barbless single, double or treble hook. Spinning, worming, prawning and shrimping are not permitted.

Sea trout: fished in exactly the same ways as for brown and rainbow trout.

Brown and rainbow trout (natural or stocked): a floating fly or nymph not exceeding size 10 and of a type indigenous to the River Test, fished upstream only. 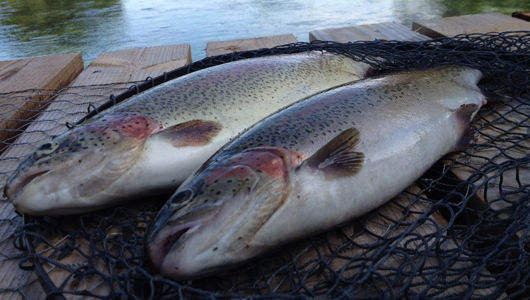 There is generally no restriction on the number of trout that can be caught and killed on any one day, with the exception of mayfly season, where the recommended number should not exceed five trout killed per day per rod. Trout under 3/4lb must not be retained and if caught should be delicately handled and returned to the water unharmed. If a member does not wish to kill a fish caught, it may be returned to the water but must be landed as quickly as possible and handled carefully at all times (see Catch and release section, below). The Advisory Committee may impose specific exceptions to this freedom to “catch and release” and these will be notified in the annual information provided to members. Members are requested not to fish for obviously under-sized or recently stocked fish. In the late season, black or gravid fish are not to be fished for.

Details of all fish caught, including grayling, must be entered in the record book (which is kept in the main fishing hut) before leaving the fishery or recorded by placing a card in the box provided outside the hut. The information in the record book about fish killed or released, where the fish were caught and the flies used, assist other members with their tactics.

The information is also of great importance to the Fishery Manager, for example, to set stocking policy, to adjust the mix of brown and rainbow trout, to award the annual prize for the season’s most successful fisherman (or, frequently, fisherwoman) and to work out the statistics for fish caught per fisherman day at the end of each season. So please make sure that all catches are recorded.

The fishery is divided into four two-rod beats, each consisting of a stretch of the main river and a stretch of the carrier. Ownership of a of a share in Timsbury Fishery Limited entitles the holder to fish one rod on a specified day every other week during the season (for example, every other Tuesday.)

Fishing rotates over the four beats so that a rod fishes the whole fishery every eight weeks. 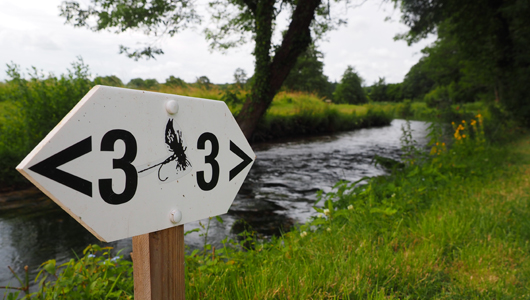 Members and guests must not fish unless each rod is in possession of a current permit or licence of the type prescribed by the Environment Agency for the particular species of fish for which the rod is fishing. In the event of doubt, the fishery manager may determine conclusively what species of fish is being fished for with the tackle in use. Members and their guests must not fish unless they are able to provide evidence of compliance with the licence requirement, if reasonably requested to do so by the fishery manager or other authorized official.

7. AMENDMENTS TO THE RULES

The right to make amendments to the rules of conduct is vested in the Company, which will review them regularly and, if practical, ensure that discussion of any changes takes place at the Syndicate AGM prior to the change taking effect. With the exception of changes to paragraph 5 of this section, changes may be made with the consent of 75% of the holders of the ordinary shares.